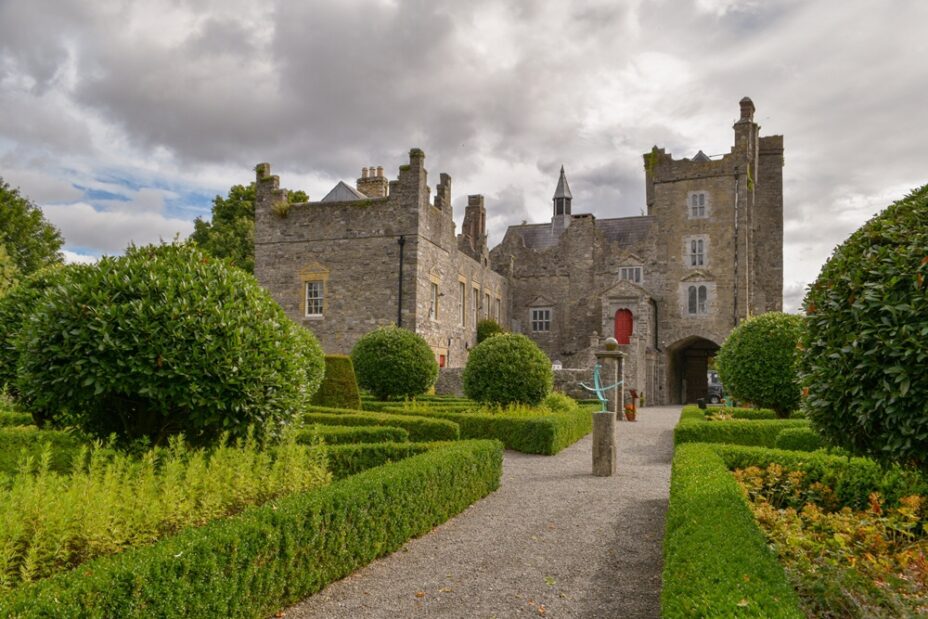 In the summer of 2019 our family had the chance to spend almost three months in Dublin and I’ll try to tell you about everything interesting, popular or not, in the city. Overall, I wouldn’t say that I liked Dublin much, unlike Ireland. If you go out of the city everything is gorgeous, but Dublin itself not so much… There were amazing places, of course, and I will tell you about one of them now.

Drimnagh Castle, south Dublin, was built c1240 and occupied until 1954, making it one of the oldest continually-inhabited castles in Ireland. It is the only Irish castle still surrounded by a flooded moat and is a fine example of an old Norman feudal fortress.

Drimnagh of long ago was an area covered by vast forests, its rivers populated with fish and water fowl. In the forests and on the mountainside roamed wild boar, wolves and great herds of deer. After this era came the Vikings and then to the people who left the biggest mark on Drimnagh: the Norman invaders.

In 1215 the lands of Drymenagh and Tyrenure were granted to a Norman knight, Hugo de Bernivale, who arrived with Strongbow. These lands were given to him in return for his family’s help in the Crusades and the invasion of Ireland. The lands around Drimnagh at this time were rising and falling hills and vast forests stretching to the Dublin mountains. All through the 13th,14th and 15th century the area around the castle was sparsely populated and a document shows that only around 11 people lived in the area during the 18th century.

Drimnagh has seen its fair share of raids and attacks by the O’Toole Clans through the years. There are many undocumented raids and battles. In the 19th century, after these tumultuous times Drimnagh saw the arrival of industries like the paper mill at Landsdowne valley and  other enterprises. Small Inns and lodges were built to house travellers on there way to Tallaght or further afield. Some of these are still in business today.

In the very early 20th century, the castle and its lands were bought by Joseph Hatch, a dairy man. Joseph Hatch was a member of Dublin City Council. He bought the castle in the early 1900s to provide grazing land for his cattle. He restored the castle, which became a summer home for his family. Occupied by the Hatch family until the mid-1950s, Drimnagh Castle when it was sold to the Christian Brothers to build the school that now stands there. Initially the Christian Brothers lived and ran a school there until 1956, when they moved to their new schools and monastery close by.

After many years of activity, history and folklore the castle became uninhabited in the 1960’s, and fell into disuse and only housed countless pigeons, and other fowl. Over the next thirty years or so the Irish weather took its toll on the once great structure and caused untold damage.  One day in 1985, a man named Peter Pearson, swung by a rope over the moat into the castle grounds. Having an interest in restoring old buildings, he set about trying to get the castle repaired to its former glory. He also discovered that the castle was potentially destined for destruction, which thankfully was prevented from happening. Many individuals and organisations were involved in the early stages.

Drimnagh Castle is the only castle in Ireland to retain a fully flooded moat.  Its rectangular shape enclosing the castle, its gardens and courtyard, created a safe haven for people and animals in times of war and disturbance.  The moat is fed by a small stream, called the Bluebell. The present bridge, by which you enter the castle, was erected in 1780 and replaced a drawbridge structure.

The undercroft was built as a storage room for food; it also doubled up as a refuge if the castle was attacked. The fireplace and bread and smoking oven are recreations of the kitchen that was here in the 19th century.  The narrow stairs leading up to the next floor are unique in that they turn to the left, unlike most Norman castles which turn to the right.

The great hall was originally an all-purpose living room/sleeping quarters in the 13th century. During the day tables and benches were placed in the centre of the floor for dining. At night straw or reed matting was laid on the floor and the occupants of the castle slept on this covering.

The tower was built in the late 16th or early 17th century. It is approximately 57 feet high and commands a great view of the surrounding countryside. Most of the castles at Ballymount, Terenure and Rathfarnham could have been seen from the top of the battlements.

A popular feature of Drimnagh Castle is the beautiful garden – designed in a formal 17th century symmetrical layout to supply herbs and medicinal plants to the household. Sometimes you can buy Drimnagh Castle Honey produced on site in limited quantities.

You can see the inside of the castle only with a pre-booked tour from this site. It’s price is 6 euro per adults and 4 for children. The castle gardens and the courtyard are free of charge. It is located a little far the the city’s center but there is a comfortable public bus and the detour is worth it.