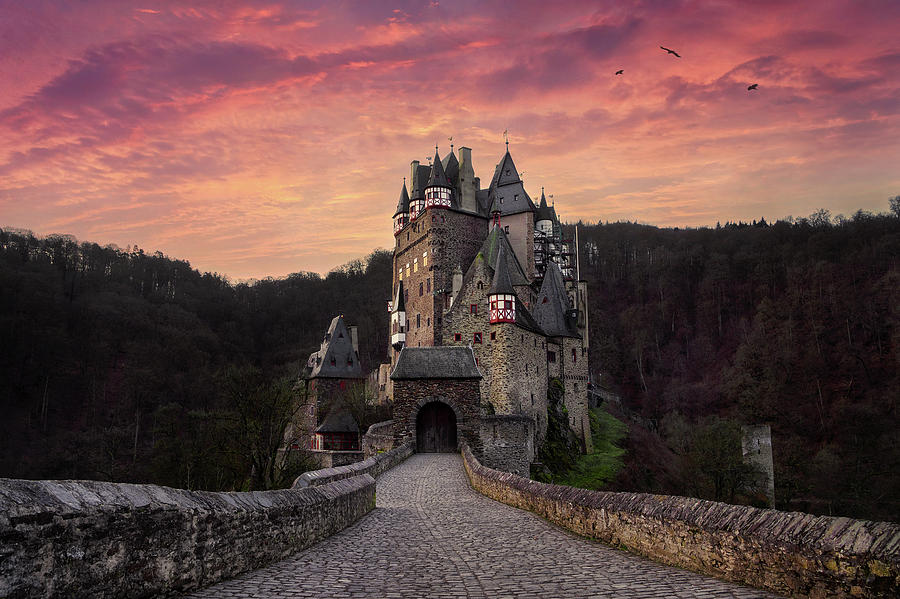 It was my birthday and what better way to celebrate it than being on the road again.

Our first stop for the day was the most famous castle in the region – Burg Eltz. We were just 45 km away from it, but had no patience at all and jumped in the car right after breakfast. After 45-50 minutes (the road is in the mountain with lots of turn and speed restrictions) we got to the the castle’s parking.

Burg Eltz isn’t very near to the parking, so you will have to walk for a while. The price for the day is 2 euro. If you want you can take the small bus that goes to the castle for 2 euro and spares you few kilometers. And here is the our main hero:

Burg Eltz is located in Wierschem, a municipality belonging to the district of Mayen-Koblenz in the West German state of Rhineland-Palatinate. What sets Burg Eltz apart from most of the famous fairytale castles in Germany is that it doesn’t crown a hilltop. Instead, it perches on a rock spur by the Elzbach River, wrapped on all sides by the verdant Eltz Forest.

Burg Eltz welcomes visitors from late March or early April to early November, daily from 9.30am to 5.30pm. Keep an eye on the official website for the exact dates, as they vary from year to year. Be prepared for long queues in peak season, afternoon being the busiest time of the day. We visited it in the early morning so there weren’t many people. What made us quite an impression was the gesture the management of the castle had decided to make for people with kids. When they saw our son they gave him small package of “Prince” biscuits. The entrance fee is 10 euro, kids go for free. The only minus is that you can’t take pictures inside.

Currently, the castle is owned and maintained by the 33rd generation of the Eltz family. Down the centuries, while the castle has inspired many writers, poets and painters, it has also faced invasion and destruction attempts.

The development of medieval castles, which we admire so much today because of their beauty and their fortifications, began in the 9th and 10th century. What used to be small manor houses surrounded by earthworks and palisades now became castles fortified with heavy walls. The prime period of castle construction was from the 11th to the 13th century – the period of the Stauffer dynasty. This eventful period also saw the first mention of the name Eltz.

In 1157 Emperor Frederick I Barbarossa issued a deed of donation, which was signed and sealed by Rudolf von Eltz as one of the witnesses. At this time he resided in a small castle complex next to the Eltzbach. Parts of this first castle, such as the Romanesque keep Platt-Eltz and four storeys of the former Romanesque “pallas” (living quarter), today integrated in the Kempenich Houses, can still be seen today. The probably oldest painted chimney in Germany and a recently discovered painted window arch also date from this period.

The brothers Elias, Wilhelm and Theoderich had a dispute and the family split up before 1268. This led to the castle and the estate being divided among the three branches of the family.

Here is what you can visit during the tour: The Entrance to the Rübenach House was converted into an armory during the Romantic period. It contains the oldest surviving cannon bolts, piercing and thrusting weapons as well as a selection of 14 to 17 century firearms.

Next is the living room of the Eltz-Rübenach family. It was built in 1311 and houses the famous painting “Madonna with Child and Grapes”, a masterpiece by Lucas Cranach the Elder.

The Rübenach Upper Hall with its murals by a Burgundy artist, the dainty Gothic chapel oriel and its colourful windows is also referred to as the Bed Chamber because of the large carved four-poster bed in this room.

The Dressing Room adjoining the Bed Chamber, or Rübenach Upper Hall as it is called, is also decorated with 15 century murals, ornaments and figurative depictions of family members of the line “with the silver lion”. Two of the portraits depict Jutta and Lanzelot von Eltz next to the year 1451.

In 1881 Count Karl furnished the room above the Rübenach entrance as a study for his wife Ludwine. The murals by E. Knackfuß depict Late-Gothic vines framing portraits of himself with his two sons and six daughters in Romantic gowns and poses.

This room is named after the two electors from the house of Eltz, Jakob zu Eltz of Trier and Philipp Carl zu Eltz of Mainz. Its original furnishings document the stylistic developments during the 17 and 18 century.

This late medieval hall of the early 16 century was used for festivals and negotiations by all three branches of the family on Eltz Castle. Remarkable are the original heavy oak ceiling and the heraldic frieze as well as some beautiful suits of armour.

This irregular room, referred to as Angel Room or Hunting Room, contains hunting trophies, elegant hunting weapons, furniture with fine intarsia and an old embrasure dating from the construction period of the castle. Next-door is the attic of the Castle Chapel with a collection of model cannons.

The Wambolt Room is furnished with beautifully inlayed furniture, Dutch portraits, a late Renaissance tapestry as well as historic household implements: a clothes press, a spinning wheel and a reel dating from the 17 and 18 century.

This small chamber is referred to as Countess’ Room or Children’s Room because of the paintings of children and young members of the House of Eltz or their relatives of the 17 and 18 century. Here you can also see the probably oldest surviving painted Renaissance bed in Germany, which was made around 1520.

The Banner Hall of around 1480 with its opulent late Gothic net vault is the most spectacular room in the castle. It was probably a chapel before being integrated into the Groß Rodendorf House around 1510. Later it was used as a living and dining room.

The 15 century Rodendorf Kitchen is one of originally four kitchens in Eltz Castle. The objects displayed here date from the 15 to the 19 century.

The architecture is the castle’s main attraction: its eight towers, soaring up to 35 metres high, its oriels, roofs, timber frame structures and turrets make it “the epitome of a castle”, a picture book castle.

On the way back to the parking you can take the bus again or you can just walk on the picturesque path through the woods. But keep in mind that it’s a steep way up and if you are not up to it you’d better skip it.

Our next stop was the Cochem castle, about 40 minutes drive from Eltz. Here the parking is a big problem, so I’ll tell about your possibilities.

There are few parking spots in the city center, but they were all full in the weekend. We found a spot, but you can stay for two hours only. If you are going to visit only the castle and don’t wander on the way, two hours would be enough.The price was 2 euro per hour.

You have to options to get to the castle, most people take the shuttle bus, because it’s a steep climb up. The price is 4 euro return and you can find more details here. We were also going to take it, but missed it for few minutes and didn’t have enough time to wait for the next one.

So, we took the way up. The lady in the tourist center told us that it takes 20 minutes to the castle and we had a pre-booked tour to hurry for. This is the way, keep that in mind:

It is very important to book a tour in advance, because there are only a few of them, especially in English. The fee is 6 euro. We managed to get on time, but we couldn’t catch our breath despite the beauty, that welcomed us.

Cochem Castle dates back to the first millennium, the year 1000 A.D. It was the home of the Palatinate counts and was built on the orders of Count Ezzo.  The castle was used mainly as a defensive structure. It was said that at one time, it housed as many as 40,000 knights.  The Sun King Louis XIV attacked and burned the castle to the ground in 1688. It wasn’t until 1868 that Mr. Louis Ravené, a Berlin businessman, began to reconstruct it in the Neo-Gothic style that we see today.  The castle sits on a 100 m hill overlooking the River Moselle.

During the tour you will see ten rooms and, thankfully, photographing is permitted.

There is a popular legend of a servant who was traveling and overheard a group of armed men planning an attack on the castle.  So he rushed to the castle to warn them and when the armed men showed up they were overwhelmed by the well prepared knight of the castle.  The knights of the castle celebrated with food and wine. This started a tradition called Knipp Monday.  One can experience this tradition after a tour of the castle by participating in the Kight’s Meal.  The Lord of the Manor will greet you with a cup of the local Moselle wine and sit you down for a four-hour extravagant feast.

We weren’t part of it, but at the end of the tour, in the last room, there was a little very pleasant surprise for the kids. Under the stairs, in a secret cupboard, there was a hidden treasure of golden chocolate coins from which every kid could take. There is no need to tell you how impressed everyone was, even the parents.

And, of course, let’s not forget the gorgeous views from the castle:

The way after the tour was easy – the only direction was down. But we faced another problem – we wanted to see the town, but our time in the parking was almost ended. We wandered if we could try to pay again for two hours, but there was no one to ask and decided to play it safe and ask Google. It turned out that kust few blocks away there is a huge parking, even cheaper. Here’s the location, the price was 0.40 euro for the first 30 minutes, next – 0.20 every 30 minutes again. We left the car and went for another walk.

As early as Celtic and Roman times, Cochem was settled. In 886, it had its first documentary mention as Villa cuchema.  In 1332, Cochem was granted town rights, and shortly thereafter, the town fortifications, which still stand today, were built. In the Second World War, great parts of Cochem’s old town were destroyed. You can walk around the little paved alleys

Tracing the sloped alleys are gabled, half-timbered houses, several storeys high and topped with Moselle slate tiles. The best ensemble of these is on Marktplatz, where the Baroque town hall from 1739 is sophisticated company for an alfresco meal.

The largest of Cochem’s three Medieval city gates was built in 1332 at the northern entrance to the city. For hundreds of years the gate was a landmark for long-distance travelers riding stagecoaches through the region to Cologne or Frankfurt. As with many old gates, the Enderttor was Cochem’s city prison for a time and now adds lots of Medieval charm to a tour of the old town.

Next to the upper part of the old town the riverside walkway broadens into a park and just before the Skagerrak-Brücke (bridge), beside the quay for tour boats you can turn back for the ultimate view of Cochem Castle on its high roost.

If you’d like you can take a boat tour, but we just haven’t enough strength and just wanted to go back home. After all I had a birthday to celebrate and a few kilometers to the apartment.

After this exhausting day this is my goodbye ; my improvised cake and a reminder – don’t forget to travel 😉